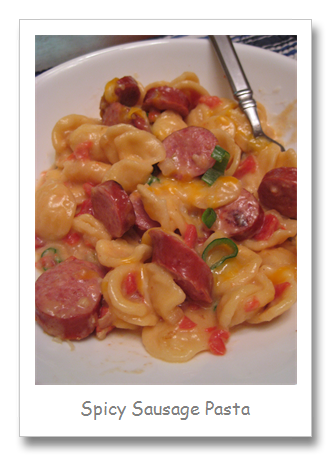 Honestly, I wasn’t sure about this one. The combination of ingredients seemed weird to me, but I was feeling adventurous the day I made the weekly menu!

It actually turned out to be really tasty! I will admit that I had a can of ‘medium’ Rotel tomatoes on hand so I used it, but honestly it was a little too spicy for me. The medium the recipe calls for would be perfect.

I don’t think children would eat this recipe as it’s listed because it does have some kick, but I think you could probably replace the Rotel with just diced tomatoes and get a kid-friendly version without the heat.

Additionally, the monterey jack is key here – don’t replace it with what you have on hand. I ate leftovers with cheddar and it really just isn’t the same.

Finally, lest I forget – this is a one-pot meal, folks! 1. Add olive oil to an oven-safe skillet over medium high heat until just smoking. Add sausage and onions and cook until lightly browned, about 4 minutes. Add garlic and cook until fragrant, about 30 seconds.

2. Add broth, tomatoes, cream, pasta, salt and pepper and stir. Bring to a boil, cover skillet, and reduce heat to medium-low. Simmer until pasta is tender, about 15 minutes.

3. Remove skillet from heat and stir in 1/2 cup cheese. Top with remaining cheese and sprinkle with scallions. Broil until cheese is melted, spotty brown, and bubbly.