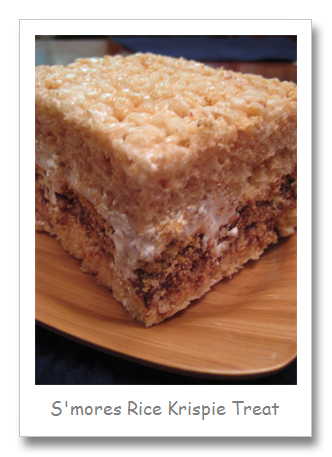 I saw these and couldn’t resist making them for our Memorial Day picnic.

These were super-simple to put together, and SO sweet. But good!

I think if I made them again I’d just make 1.5 batches of rice kripie treats, to thin down the treat a bit. With two full sets of rice krispie treat and all the fillings in the middle, these little suckers were pretty ‘tall’ and hard to get your mouth around!

* I suppose you could do this in one large batch and divide it between 2 pans, but that seemed like it might be hard to work with, so I made them separately.  So…

Either lightly grease, or line a 9×13 pan with greased parchment paper.
In a large mixing bowl, add 6 cups of the Rice Krispies, and set aside.
Melt 3 tbsp butter in a large sauce pan over medium low heat.
Add one bag of the regular marshmallows, PLUS an extra 1/2 cup of the mini mallows.
Stir until completely melted.
Remove from heat, pour over the cereal, and mix well.
Pour into the prepared pan, and press in firmly.
Set aside.
Make the second batch, following the same procedure.

Break the chocolate up into pieces and place in a microwave safe bowl.  (Or melt it any other way you like.)  This took about 2 minutes, stirring after the first and second minutes.
Spread the chocolate over the first pan of Rice Krispies bars, to within about an inch of the edge.
Sprinkle with a bit of the kosher salt.
Working quickly, cover the still wet chocolate with graham cracker squares.  (I broke them into pieces to make cutting a bit easier.)
Set that aside to let the chocolate set.

When the chocolate has set, take the second pan of RK Bars, and take them out of the pan.  (Just run a knife around the edge, lightly lifting the edges as you go.)
Place them on a large baking sheet covered in a sheet of parchment paper, then spread some Marshmallow Fluff over them, again–to about an inch from the edge.
Carefully remove the chocolate and graham covered RK Bars out of their pan, flip them over, and place face down on the Marshmallow Fluff Covered bars.  You want the grahams meeting up with the Fluff.
Lightly press them together, and let them sit for 10 minutes or so.

Cut into squares for serving.