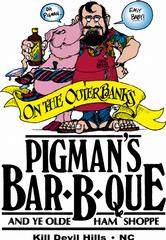 The husband and I hadn’t been on a vacation since our honeymoon in 2007, so when the opportunity to spend a week in the Outer Banks presented itself, we jumped on it!

Just prior to leaving, Brown Eyed Baker had also spent some time in OBX, and she posted some of their favorite eats while there.

I thought I’d do something similar, and provide a brief write-up on what we enjoyed while on vacation!

For those familiar with the Outer Banks, we stayed in Kill Devil Hills – just north of Nags Head. We didn’t venture as far north as Corolla or Duck with this trip, but we’re hoping to repeat the trip and broaden our horizons next time!

To say we’re smitten with the area is an understatement. If I could figure out how, I’d move there in a heart beat. The husband and I both fell in love with the place! And I loved that it didn’t feel just like a vacation spot. There were enough year-round residents to truly make it feel like a place you could live! We actually ate at Pigman’s twice. It was a mere few blocks from the house we rented, and was convienent. Our first trip there was within hours of arriving – we had left home at 4am, and upon arriving and unloading the car…we were very ready for lunch. DH and I both had pulled pork sandwiches – he had baked beans, hush puppies, and coleslaw with his….I had fries, hushpuppies and coleslaw with mine.

This was my first interaction with “Carolina” BBQ, and I was a bit jolted by the strong vinegar flavor. But honestly? It grew on me! The pork was delicious and needed no sauce (although Pigman’s sauces were delicious as well!) and the hushpuppies were AH-mazing 🙂

DH also tried their beef BBQ the second time we went, and I found I liked it a little better.

Still – a great meal, and well-priced as well!

The salsa at this place was cooked, and tasted as though they used roasted tomatoes. It was delicious and a bit addicting!

Husband’s steak and shrimp fajitas looked delicious, as did my baja chicken tacos, which were served with shredded cabbage, cheese, fresh pico de gallo and sour cream. The rice was a plain white rice, and the black beans were unseasoned as well.

The meal – all in all – was tasty, but not particularly memorable (beyond that salsa in the appetizer!) Also, we were originally seated in the restaurant area, and it was so incredibly loud in there, we asked to be moved to the bar. So if you go – ask to sit in the bar! 🙂 Oh. My. God. These are the best donuts on this earth. Seriously. I’ve had fresh, hot donuts in a variety of places (Krispy Kremes in Vegas, fresh from the oven, Winchell’s in L.A….and many more) and there are no donuts, like these donuts.

They are freshly fried as you order them. Then, they’re subjected to an ‘assembly line’ of delicious goodies for the top – glaze, chocolate frosting, vanilla frosting, sprinkles, nuts, and more!

I highly recommend the glazed – they were superior to the others, and the most heavenly confection ever.

You must try these donuts! 🙂 I’m not much of a buffet person. But I promised the hubs we’d go to one seafood buffet while on vacation. I chose this one because, frankly, it seemed like the classiest. There were some rough-looking buffets in OBX!

I was pleasantly surprised by this place. When you walk in the door, it looks like you’ve entered a restaurant in Vegas. It’s really a beautiful place!

The food, as well, as delicious! I filled up on veggies and broiled flounder, steamed shrimp, and cornbread. Hubs said the crab legs were fantastic, and there was a wide variety of crab available.

Finally – the desserts at this place were amazing. I’m not talking your run-of-the-mill buffet desserts. The cakes tasted made-from-scratch, and they were absolutely delicious!

The buffet restaurant area is wide open, and can get loud/echo-y….again, we sat in the bar area, and found it to be quiet and lovely. We even had a television in our booth! LOL The large sand dunes in the Outer Banks are located at Jockey’s Ridge State Park – and this restaurant was nearby! 🙂

We settled on this restaurant because it received such good reviews, however, we were unhappy with the food at this location.

The husband had 1/2 rack of ribs (about 6 ribs), a crabcake, a baked potato, and baked beans. I ordered broiled lump crab meat with a baked potato and coleslaw.

I was happy with my portion, however, my husband felt his portions were small, and the prices too high.

As I mentioned, though, it did receive a lot of good reviews on TripAdvisor, so perhaps we’re in the minority! Our last morning, I insisted we go to this place. And I’m glad we did – and I wish we’d have gone earlier in the week so we could’ve gone twice! LOL

This place is an awesome, cafeteria-style restaurant with 36 varieties of pancakes. Yep, you read that right. They offer 36 different combinations of toppings on their pancakes!

Since hubs and I were newcomers, we felt a bit rushed trying to read the menu and order.

Delicious pancakes! Husband wasn’t thrilled with the place because he said he felt rushed by the cafeteria style atmosphere, but the food was so good, I’d make him go back. LOL

The pancake batter had cinnamon, and something….else….I think…incorporated into it. Light, fluffy, and amazing. 🙂

The owner, an elderly gentleman, was walking around and stopped to talk to us. Like me, he was from Pittsburgh, so we spent time talking about Pittsburgh, and how he sold his restaurant in Pittsburgh 30 years ago and started Stack ‘Em High in OBX after vacationing there!

It was great to talk to him!

So there’s the eats…I’ll do another post on the activities we enjoyed as well. 🙂