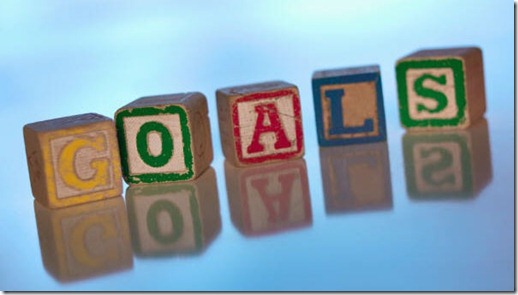 I don’t have a particularly good track record with goal setting. When I started on this healthy living journey, I guess my goal was my wedding. I was in-between dress sizes when I purchased my wedding gown, and went with the smaller size. It was a good thing I did, as I ended up having the smaller-sized gown taken in at my last fitting, because I’d been successful at dropping about 30 pounds in the year prior to the big day.

But since then, my fitness and foods haven’t been particularly goal-oriented. At least not to the point where I’d been writing them down.

I started lifting heavy, but I did it because I wanted to be stronger, and I didn’t set a specific goal.

I started running (and then, subsequently, quit running after a bout with piriformis syndrome that was unresolved by physical therapy) because it looked like a quick and efficient cardio workout – and I’ve never been much of a “cardio queen” 🙂

I changed my eating habits, but it was more in response to being tired of my IBS symptoms and feeling sick constantly, than any specific goal-set.

But through it all I never set goals. At least, I never thought about them as goals.

When I started this blog, I was full of vim, vigor, and an abundance of free time, as we were just coming off the holiday season, AND we were buried in about 2.5 feet of snow. Goals sounded like a fantastic idea!

But know what? I haven’t done a single one. Not one. And what’s worse, looking back on them, I don’t have much desire to do any of them….well, except maybe try spinning. 🙂

And then here recently, Susan focused on goal setting. And every month I read Susan’s goals with excitement anyway. I LOVE reading other people’s goals! And then Janetha posted her monthly goals. And I thought…well…maybe I can do goal-setting, but maybe I need a shorter time frame. Shorter than a year. J

I am, after all, an instant-gratification kind of gal 🙂

So…baby steps. We’re starting with October. Monthly goals. I picked my categories rather randomly…basically setting the goals and then dumping them into “categories”

I’m already 5 days in to October, so it’s time to get crackin’!

So there it is…October’s goals!