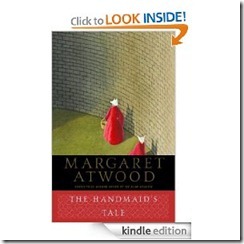 Really enjoyed this book. It came out when I was 3(!) but it has had on-going resurgences in popularity since then. The book is a little hard to read; certainly the type you need to focus on; because the narrator occasionally drops into random, broken sentences using alliteration and other speech tactics. The premise of a male-centered dystopian society where fertile women are used as, essentially, breeding stock, is definitely believable. In most westernized countries, the birth rate continues to plummet. We’re always at war with someone. It’s scary how close we are to stepping over that line into a world where nothing is free. Loved the historical brief at the end which tried to tie up loose ends regarding the end of the book and the "manuscript" as they refer to it….didn’t love the ending. I understand that it was necessary for the type of book it is, but you grow attached to the narrator and the ending leaves you hanging.  After walking around thinking about it for a week or so I realized it’s the only ending Margaret Atwood could have provided. Anything else would’ve seemed to sell the story short. I really enjoyed this! A slightly more adult and unique twist on all of the young adult (YA) books that have cropped up in recent years. The storyline – following a 17 year old "demon trapper" named Riley (the only female trapper) as she and her Guild of trappers try to rid Atlanta of demons. The back story, apparently, is that as things fell more and more into disrepair (the economy, etc), Lucifer’s minions began emerging in our world and wreaking havoc. Teams of Demon Trappers were put together to get rid of them. It’s a nice blend of fantasy, magic, and reality.
I really loved this first book, and admittedly I think I originally bought it because it was a low-cost read. I was disappointed to see that the next two in the series are $9.99. I don’t mind a low-cost read to draw me into a book series, but I feel like $9.99 for a 300-ish page book on my Kindle is a little high. I picked this up as either a Kindle freebie or a cheapie. It looked interesting and I like young adult novels as much as anything else.
BUT.
This one wasn’t for me. The story follows Chris Buckley and his mother, who move back to her hometown of Solitary, North Carolina, after Chris’ parents divorce. He falls in love with a girl at school who has secrets, and comes to understand nearly everyone in town has secrets – and most of them are dark.
Sounds good, right?
But there were a few issues. The editor of this book (maybe the author?) inserted entirely too many paragraph breaks. The formatting and the font on my kindle nearly drove me nuts. It was hard to read, and the book is twice as long as it needs to be because of the weird spacing.
Second, is this book listed as Christian fiction? It really should be. And that’s fine – but nothing in this description let me know that…and suddenly I’m reading about God and Jesus and good and evil. I’d like to know that bit up front, mmkai?
Finally – and yes, I know there’s at least a second book in the series, and perhaps Travis is writing more – but waaaayyyyy too many storylines were started in the book and I feel like NONE of them were resolved. We never really found out much about the main female character’s "secrets" – let alone the other townsfolk who appear in the book. And the ending? Disappointing and rushed.