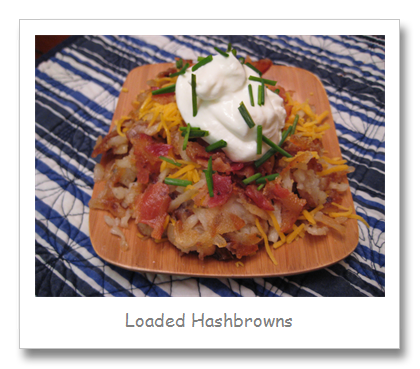 Why I never thought of this is beyond me. I LOVE potatoes. Especially hash browns. And I love all the fixin’s of a baked potato…so why not combine them?!

These were delicious and I’d make them again in a heart beat.I served them with eggs and sausage as ‘breakfast for dinner’.

The original recipe called for Hungry Jack hashbrowns but I normally use the frozen Oreida variety and I did so here as well. I just thawed them for a few hours on the counter before beginning. I think the Hungry Jack version container is 4.2 ounces, but I used about half a 20 ounce bag of Oreida.

– Open the Hungry Jack Hashbrowns and fill it with hot tap water. Close the container and allow to sit for 12 minutes.

– In a large skillet over medium heat, cook bacon until crispy, remove onto a plate lined with a paper towel. Reserve the grease in the skillet.

-Crumble the bacon when cool enough to handle. Drain the excess water from the hashbrowns.

-Pour the hasbrowns into the skillet with the bacon grease. Mix in the salt and pepper.

– Cook the hashbrowns over medium high heat, until your desired crispiness, stirring occasionally. I cooked mine for 10 minutes.

– With a spatula, flatten the hashrowns into the skillet and cook for a few minutes so the bottom will get crispy.