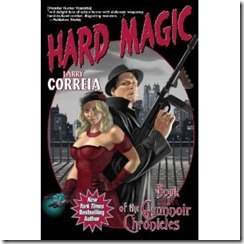 Short set of reviews – summer doesn’t provide much time for reading…too much time spent outside gardening and playing with the pup! The husband is a pretty avid Larriy Correia fan, and is quick to purchase signed copies of all his books as soon as they are made available. This book is the first book in Larry’s newest series, and DH picked it up as soon as he could. I think THIS series is much more my style as opposed to Larry’s Monster Hunter International books (although I’ve enjoyed those too). It reads like a spin on the 1930’s which makes it pretty interesting…and then he gives people magic. Yeah – it’s pretty awesome. There are different categories and abilities of magic and you meet people with each type of magic and get to see how they interact, fight, etc. With fighting, especially, it really adds an extra element that makes it a very interesting read. And Larry goes to the trouble of pulling quotes and snippets of real history out and re-writing them to fit his book and the characters magical properties. He did his homework on this one!

I loved the explanations of the types of magic used, and the characters are pretty awesome as well (I’m still trying to decide who my favorite character is, as many of them are intriguing and leaving you wanting to know more).

This was a quick read for me, and what kept it from getting 4 stars was probably it’s parallels to the Monster Hunter books. I read those books before ever actually SEEING Larry Correia and when I did I almost laughed out loud because that was exactly how I pictured the main male character in the Monster Hunter books. In these, I kept seeing too many similarities in the main male character to the Monster Hunter books, and Larry himself….that would probably be my big complaint and having read some of Larry’s blog, apparently others have said this as well (and it drives.him.nuts.). Additionally, in both series there’s a giant evil, well, octopus/squid, thing, so there’s an easy parallel there too.

These books are rich enough and each character’s story diverse enough that I could probably read a whole book on each individual character’s history and their powers. That’s pretty darn good for the  first book in a new series, if you ask me.  (Although, Larry…I recommend you write Heinrich’s story first! There’s too much good detail in Berlin being a Dead City to let that opportunity pass Amanda Hocking, one of the co-authors of this book, is pretty impressive to me. She couldn’t get a publishing offer from one of the big houses, so when e-readers became popular, she self-published her work to e-ink….and now she’s a millionaire. Take that, big publishing houses!

I’ve read other books of hers and reviewed them here – and honestly they were pretty good.

This book though….really, really not so much. I disliked this book from the beginning, but I always insist on seeing a book through to the end. The premise is shallow, and the conclusion unsatisfying. The female character – a spirit from another “dimension” if you will – is flaky and hard to accept or get attached to. The male character – an average all-American boy -  is simplistic and offers little in the way of endearing features…and the storyline is more far-fetched than even I can enjoy as a fantasy/sci-fi reader (a high schooler figures out alternate dimensions for a science fair project…really? really?).

I won’t continue this trilogy, but I’ll keep an eye out for Amanda Hocking, and if you like young adult works, and have an e-reader, check her out. Her books are usually very affordable.