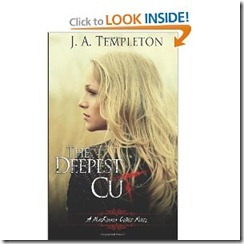 Fantastic young adult novel! My only disappointment came when I realized the author doesn’t have any other young adult novels out yet for me to read (edit: the sequel to this novel, The Haunted, was just released for Kindle) 🙂
The story follows a teenage girl, Riley, who can see ghosts. After the death of her mother, the family moves to Scotland, where Riley quickly becomes involved with two cursed souls.
Very well written – both for a young adult novel and just as a book in general. LOVED this!

The Darkest Night (Lords of the Underworld #1) Picked this up as a daily deal on Amazon for my Kindle. The premise here is that a young woman seeks out the help of a group of men known as the Lords of the Underworld who are rumored to live in the hills around Budapest, in search of someone to help her rid her mind of a psychic power that lets her hear all conversations that happened in a place in the past. And since it’s a paranormal romance, you can guess she falls in love with one and there’s murder and death and mystery and intrigue. But. I thought it would be a lot like the paranormal romance series The Black Dagger Brotherhood, which I love. But it just…fell short. I feel like it followed the same storyline idea, but somehow it just fell flat. I think it might be a lack of character development, combined with a lot of random, unnecessary details woven throughout the plot. I’m not sure, but I know I didn’t like it anywhere near as much as Black Dagger. (out of 5)  full series rating

I can’t find the words to express how much I enjoyed this series. I wasn’t so sure – I found the first book to be kind of obnoxious – but since I’ve finished all 5 in JUST the month of January, it’s easy to tell I’m hooked. 🙂
I loved the play between the different "fantasy" creatures in the novels, as well as the humans. And yes. I love the smut, too. 🙂 It isn’t as often or as – ahem – detailed – as the Black Dagger Brotherhood books, but it is certainly there and on display. I loved the characters, the plots for each book – everything!
I even dreamed about different aspects of this series…and I don’t normally do that. The last time that happened was with the Outlander series by Diana Gabaldon – which I also adored.
So as long as you’re not feeling too "prude" – read it! It’s a great series. 🙂 Books that have a lot of "hype" are always tough to review. People talk about them like they’re the best thing since sliced bread, and well, that’s a hard standard to live up to.
That being said…I did enjoy this book. I don’t think it was the cat’s meow.
Character development was very, very well done on this book, and the storyline was fantastic. I dare say the "building" to the writing of the story of the "Help" was a little long. It seemed to drag a bit there through the first half of the book….and then suddenly the "Help" book
was released and the story sort of…well…fizzles. I wasn’t particularly happy with the ending, either…but i acknowledge that I have no idea how I would’ve dealt with that ending either!