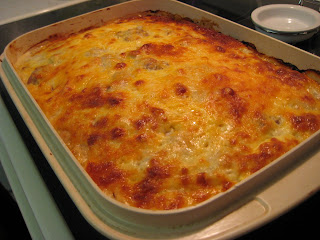 I was in the mood for something “different” for our weekend breakfast this week, and when I came across this recipe at Pennies on a Platter I thought it fit the bill! (Plus, it made a lot, so I hoped I could take leftovers for breakfast during the workweek!)
This casserole was good, but it wasn’t as good as I’d anticipated. I used frozen hash browns (the recipe didn’t show a preference) and they stayed a little mushy under all that egg. I also think it needs some kick…this is definately a base recipe, and probably some peppers or hot sauce would be awesome with it.
It was tasty — I just think the eggs, sausage, and hash browns would’ve been tastier as three separate entrees.
Gundy’s Breakfast Casserole
(Pennies on Platter)
16 ounces hashbrowns or tater tots (I used frozen shredded hashbrowns)
1 cup sour cream
1 cup cream of xxx soup (I used chicken)
1 cup shredded cheddar cheese (I used a mix of cheddar and a mexican blend)
1 diced onion
1 lb. breakfast sausage (I used turkey sausage links, and chopped them up finely. I also put them in uncooked…I keep thinking it’d be a better consistency if they’d have been cooked)
10 eggs
3/4 cup milk
Directions
– Spray casserole dish (I used a 9×13) with cooking spray and place hashbrowns/tater tots in the bottom of the dish.
– Mix together sour cream, cream of xxx soup, cheese, onions, and sausage
– In a seperate bowl, beat eggs and mix in milk
– Combine egg mixture with the sour cream mixture and pour over the hashbrowns/tater tots
– Bake in a 375 degree F oven for 1 hour to 1 hour 15 minutes (or until done).