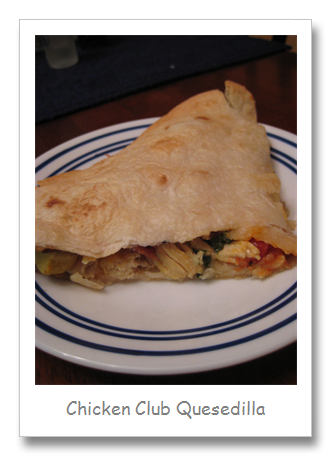 We had these as a quick weeknight meal and they were delicious. I had made the bacon and chicken in advance, which made it even quicker.

I didn’t measure my chicken – I just used two large chicken breasts, and the tortillas I used were what we had on hand – burrito-sized. This combination made two LARGE quesadillas. DH finished his, but I only ate half of mine.

I also dipped mine in low fat ranch dressing. Yum! Cook bacon until crisp and set aside. Salt and pepper sliced chicken and add to skillet with bacon fat. Cook until browned and remove from pan.

Preheat oven to 450 degrees. Rub olive oil on one side of a flour tortilla. Lay tortilla on baking sheet, oiled side down. Add chicken, bacon, tomato and avocado mixture.  Add cheese. Top with another tortilla and rub the top of it with a little more olive oil.

Bake at 450 degrees until lightly browned and crisp.