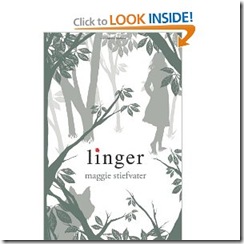 I wanted to love these.

The series was recommended to me (and thousands of other readers) because I loved Twilight, and it’s a similar, Young Adult, paranormal-boy-falls-for-normal-girl story. Shiver didn’t live up to my expectations. I can’t quite put my finger on why it isn’t very good. Perhaps it’s because the author physically throws you into the middle of the storyline on the first page. Perhaps it’s because there isn’t enough build-up of the relationship between boy and girl. Most definitely it has something to do with all the side-dialogue that goes nowhere (a trip to a sunny locale with a friend drops off the face of the planet after having been referenced for 3/4 of the book, for example). And it most definitely also has something to do with the lovers are parted for 2-3 chapters…not enough to let the depth of sadness at being parted really sink in for the reader.

All that being said, I will admit, I continued on to read the second book, Linger. Call it an automatic dedication to any series I read, call it curiosity, call it hope that it gets better…but whatever flaws the first book has, it wasn’t enough to keep me from reading the second one.

Linger, the second book, slowed to a crawl after all of the action of Shiver. The characters seemed to be running in circles, going nowhere, until the last 5 pages of the book – which leaves you in suspense, as the third book, Forever, doesn’t come out until July 2011. The characters seem flatter in Linger; there’s less emotion and less communication, and the characters all seem to be different personality types from the first book. New characters are introduced, but not necessarily formed to an extent that you can relate or bond to them.

I will read the third book when it comes out this Summer, but this series is one I definitely hesitate to recommend. They were quick reads for me, but I wouldn’t recommend someone spend a lot of time on them…there’s just something lacking!

Friend me on GoodReads! Find me via email: kellybewell@gmail.com