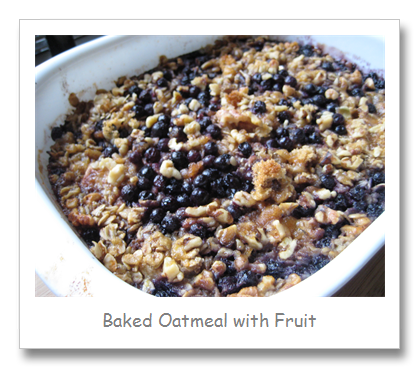 Annie never steers me wrong….this recipe is no exception! I love baked oatmeal and already have one recipe I love. But this one is also fantastic AND it’s more versatile. Annie talks about blueberries and bananas (which is what I made), but also peaches and raspberries, nectarines with blackberries, and apples and cranberries – I also think apples and raisins would be delicious! And you can use fresh or frozen fruit, which makes it even handier – you can use whatever you have, and you can buy slightly cheaper frozen fruit instead of always using fresh.

I’ve made this using straight frozen fruit, and frozen fruit I’ve thawed in a colander so it can drain. I think it’s only slightly better with the thawed, so don’t worry if you forget to thaw your frozen fruit. I’ve even used frozen bananas (I freeze leftover bananas weekly) and it works!

This recipe also stores really well, and re-heats. I’ve made it three times in as many weeks, and kept it in the fridge for breakfast. I pack a little container, microwave it at work, and eat it at my desk. It’s still good on Friday, even though I typically make it on Sunday! In a medium bowl, combine the rolled oats, half of the nuts, baking powder, cinnamon and salt.  Stir with a fork to combine.

Spread the sliced bananas in a single layer over the bottom of the baking dish.

Top with half of the berries.

Sprinkle the dry oat mixture over the fruit in an even layer.

Pour the liquid ingredients evenly over the oats.

Sprinkle the remaining nuts and berries over the top (and brown sugar if you’re using it).

Bake for 35-40 minutes, until the top is browned and the oats have set.  Let cool 10 minutes before serving.