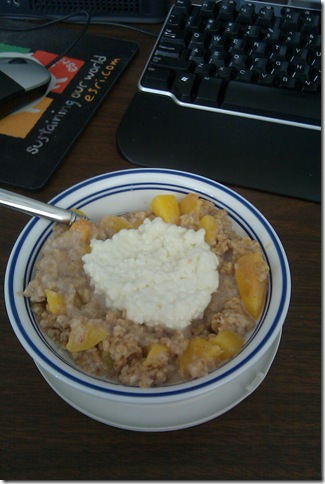 I was MIA all weekend – I don’t make myself post daily, but I try to post regularly. This weekend was just too busy to have the time!

Friday after work I skipped my workout (noted in my Friday post) and instead, went to Staples and bought a router, then did my Walmart trip for the weekend. The router was one of the “birthday presents” I bought myself. DH just bought a brand new desktop, and I have an old laptop, but it wasn’t connected to the internet, so DH and I were constantly tripping over one another in the evening, trying to get our internet stuff done! So now we have two computers. Although, my ancient laptop won’t let me play my Facebook games. LOL

Saturday was rough. I got up at 6:30 to let the pup out and I was SUPER dizzy/had no equilibrium. I took her out and went back to bed, but when I laid down, the motion kept going. It was miserable.

DH agreed to go to the Farmer’s Market for me, as well as his usual trip to the grocery store. Then, he left to help a friend move some benches, and I spent the day slowly cleaning the house. It was difficult because I was so dizzy! But I knew I had people coming Sunday morning and I had to do it. Took me all day.

DH called and asked how I was doing and I told him I felt like I had a nasty case of motion sickness!

Luckily as the day went on the dizziness became manageable. I have no idea what caused it.

I recently finished a round of antibiotics for sinus/ear infection, but now I feel crappy again. What the heck!? I’m never this sick!

No pictures, but here’s how the day’s eats went down:

3 Thin Mints. They called to me in my delicate state. LOL

Chicken and Broccoli from Chinese takeout.

Obviously no exercise, but I would argue staying upright on Saturday was an exercise. Seriously.

Sunday I woke up less dizzy, but rockin’ a serious headache. But I had a big group of girls coming over for a CABi party. CABi is basically like selling Tupperware, but it’s clothing, and you get to try the stuff on before you buy. It’s expensive, but the pieces are really high quality, so I generally buy classics/basics from the party. My friend’s boss use to host the party, but she moved to Minnesota, so Julia asked if I’d be willing to take over the hosting. She lives in an apartment, and didn’t have room for the event.

So I agreed, and had a consultant and girls descending on my house starting at 10am.

Julia and I split the food tasks, and we had…

We had a lot of fun, I spent a lot of money, and before I knew it, it was 2pm and they were all out of my house, and I had lots to do!

I packed up the leftovers (tons of leftover fruit…so tons of fruit this week!) and then set to work on my to-do list:

When I’d finished about half this list, I realized DH was moping around the house. Seriously – moping. He was bummed because I was busy and he didn’t have much to do, and couldn’t help me. Basically – he was bored.

So I dropped my list and took him for a drive to the big lake nearby. It perked him up – even if he stubbornly didn’t want to go – so I guess it was worth it.

But it also meant it was 7:30 when we neared home. I didn’t want to cook anymore, so I suggested we’d get whatever he wanted as takeout. He wanted a sandwich, so we headed to Subway.

Back home, I finished my list of things to do, and collapsed on the couch at 9pm. I was beat.

A combo of the foods from the CABi party – egg casserole, monkey bread, and fruit with dip. I didn’t have a mimosa, since my head hurt…I figured alcohol wouldn’t help.

Honestly? Chips and salsa. I was stuffed from the party food.

None, unless you could walking the pup. Which isn’t really heart-pumping exercise for me!

Monday morning I again felt rough – slight headache, and really, really exhausted. My sinuses also felt a bit “raw”. I don’t know what’s going on, but I’m not calling the doctor just yet (despite DH wanting me to).

I had Ash’s peaches and cream oatmeal this morning. This was my first foray into steel cut oats. I like them, but the cottage cheese continues to wig me out. It’s a texture thing. I’ll continue to try to get over it. The oatmeal didn’t really stick with me that long. I was disappointed. Oatmeal never wants to stick with me. I think it’s a lack of protein. But I’m never successful at getting egg whites to mix with my oatmeal. LOL

Greek yogurt (strawberry) with some fun Yogi strawberry medley flakes on top. Maybe ¾ a serving. These are yummy and crunchy, and the stats aren’t that bad. Lunch is a mish-mash…I wanted a leftover chicken sausage but didn’t know what to pack with it. LOL

I ended up with a chicken sausage sliced up, a little bit of leftover roasted potatoes with BBQ sauce on them, and a side salad.

Except – I forgot to put my side salad in my bag! Boo!< b> I even packed the dressing. LOL I ate half my fruit salad (which was supposed to be my afternoon snack) instead.

It worked, I guess. 🙂 I’m seriously lacking on veggies at this point though! LOL

I had the rest of my fruit salad and a kashi granola bar with PB on it.

I wasn’t feeling the best today so I took it easy on the workout front. I have a tendency to bounce into my workouts on Monday with a ton of vigor, and then I’m worn out too fast. That, coupled with me being a little sickie…well..I’m just going to take it easy. I couldn’t tell you the last time I did more than 45 minutes of cardio in one shot. LOL

I’m definitely not a “cardio queen”!

Tonight was DH’s night to cook so I walked Holly for 25 minutes when I got home.

Venison steak (on the grill, because it was so magically wonderful outside today), pasta tossed with olive oil, steamed broccoli

Gotta call my dad for my weekly chat with him, and then I’m hoping to get some Outlander reading in…I didn’t get a chance to pick up my book all weekend!