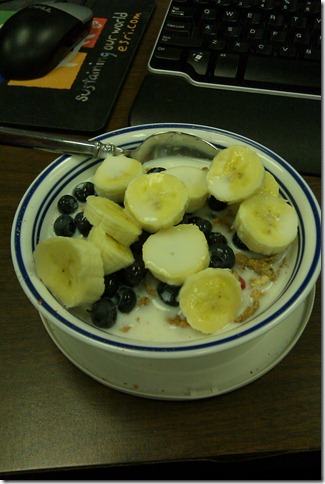 Well, March came to PA very much like a lamb, today! I’m curious to see if we get walloped again in March with snow (part of me secretly wants to!)

Today was a busy work day, but it was mostly just odds and ends, and lots and lots of emails. I was an emailing machine today!

I also had a dentist appointment. Boo. I love my dentist, but my hygienist is like the sadomasochists of hygienists. Woman has the heaviest hand with that little pick! I always take 2 advil before I go to help with the pain.

And I had braces for 5 years. So that’s sayin’ something!

Red Berry made an appearance, because its quick. I had staff meeting and another meeting this a.m., first thing. None. The Red Berry really sticks with me.

Fresh sliced ham (like…off a big ham. Not lunch meat.) with reduced fat provolone on an everything bagel thin. I am a wee bit obsessed with those things. Carrots and Newman’s pretzels on the side. Very ‘crunchy’ and ‘snacky’ lunch!

My dentist appointment at 3pm really put a cramp in my snack plans. If I ate my snack before the appointment I’d be starved by the time I worked out. So I had to eat my snack (a kashi granola bar schmeared with peanut butter and a Clementine) in the parking lot of the dentist’s office, before driving to the gym! LOL

It wasn’t the best way to do things, but I made it work, I guess!

Oh, and my pearly whites were in perfect shape! Go me!

Exercise was awesome tonight, despite feeling like I didn’t get enough calories today.

I did 15 minutes of hard-pressed elliptical, then hopped off and did these chest/tricep strength moves:

Then I hopped back on the elliptical and did another 15 minutes, at a slightly less, but still hard, intensity. Then, finished it off with my shoulder strength:

It was exhausting but exhilarating at the same time – and since I’ve been in a bit of a funk, it was awesome to get a good workout in.

Heart rate monitor said 720 calories burned in 1h35m – and since I already felt like I didn’t get the fuel I needed/wanted, tonight is probably going to be food heavy. Otherwise, tomorrow will be a world of pain. LOL

When I got home from the gym it was still slightly daylight (I was early getting there because of my dentist appointment), so I took the pup for a quick 25 minute walk. But before we left I chugged down a quick chocolate milk to give me some calories. Steak, Smart Taste pasta tossed in olive oil, steamed broccoli. And DH’s obsession with coating my plate in cheese. And serving me too much pasta.

But you know what? I’m eatin’ it all tonight. We still have double vanilla bean cupcakes left from Friday…and I think I shall have one. YUM!

One of my birthday gifts was a spa set with a bubbling foot bath and a paraffin wax container and wax. I played with the foot bath last night, and so did DH (goofy). Now tonight he wants to try the wax! LOL

I’ve used it before…I love it! So Paraffin wax, Chuck, and relaxation this evening.

Like most fitness/health related things, there are two camps on using chocolate milk as a recovery fuel. Without getting too deeply into it…

In favor of chocolate milk as a recovery fuel says:

Opposed to using chocolate milk as a recovery fuel says:

My opinion: It doesn’t always work, and it isn’t my daily re-fuel option, but in a pinch, or on occasion, it works for me.  Does that mean it’ll work for you? Who knows. But it works for me in the absence of something with a protein powder in it. I agree that a whey protein powder will be absorbed by your body at a faster rate, thus getting your muscles the recovery fuel they need at a faster rate.

But like I said – sometimes, chocolate milk is fine. And it makes you feel like a little kid.

Speaking of protein powder, I’m due for an order.

I had been using Optimum Nutrition’s 100% Natural Whey, because it doesn’t contain artificial ingredients (that generally hurt my tummy).

Does anyone know of any other brands of natural whey protein?