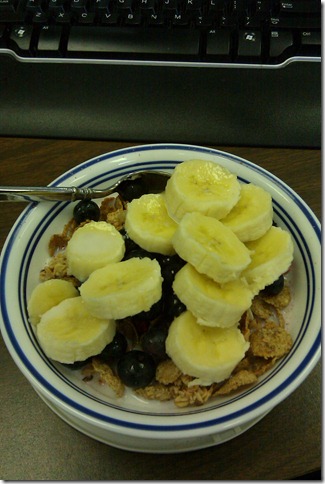 Today’s eats are wild and full of sugar. I’m not gonna lie. Tomorrow’s eats will be filled with sugar coma, I’m sure.

Oh, and just another note…I write most of my blog post throughout the day. So if my tenses don’t always match, that’s why. haha

I actually made myself eggs, ready to have an egg sammich this a.m. and then at the last minute – I copped out and packed my cereal! No snack, in anticipation of the giant chocolate chip cookie at lunch…

Leftover skillet noodle lasagna. Since DH picked out the Barilla Plus! Pasta, he now refuses to eat the leftovers for lunch. Brat.

I packed some steamed asparagus, but the lasagna filled me up. Mayhaps the asparagus will make an appearance at dinner. In addition to lunch was…tada! The Giant Cookie! (after we ate half LOL) It was amazing and delicious. I only had a small piece…and amongst my 10-employee-office we ate half. Whoops. Haha

Workout will be uber light tonight, and with the sugar crash from the cookie, all I could manage is a pear.

I also hate how when I buy pears, they’re all-of-the-sudden all ripe at the same time. Same with peaches and nectarines. What the heck!?

The original plan today involved taking my co-worker out for drinks after work. She’s getting married in Jamaica next week, so we wanted to do this one thing for her. However, with impending snow and obligations, she was unable to go.

I had originally planned to just do yoga at home tonight, thinking it was all I’d have time for. Now I had time to go to the gym.

I am uber sore and stiff from lifting the last two days. I dunno why, but it’s really been kickin’ my booty!

So I opted to celebrate my birthday with relaxed exercise….a walk with my cabin-fever-crazy pup for 30 minutes or so (you can only do so many loops around 2 streets. Our neighborhood park is still buried under snow, and the rural road out of our development is a deadly one-laner due to snow!), and 40 minutes of gentle, streeeeetching yoga.

I wore the HRM, so my calories would be counted for the week. It reported 260 calories burned. Take it, for an easy exercise.

I cooked tonight, despite it being my birthday, because I was super-hungry for coconut shrimp. I wasn’t sure how to go about it, so I kind of winged it…

I toasted coconut, then mixed it with breadcrumbs. Then I dipped the shrimp in egg whites and then in coconut/bread crumbs, then baked them on a cookie sheet, flipping them ½ way through cooking.

They weren’t bad! Although apparently my phone ate the picture…

We had risotto and green beans with it.

Well, I still need to get my yogurt in…AND split a coconut cupcake with DH. Oh, the trials and tribulations of my birthday!

DH got me a swanky, expensive, incredibly-sharp japanese santoku knife. I’m in lurve!

My ILs got me an awesome foot bath/paraffin wax combo set. I’m excited to play with it. They also got me a new crepe maker! Hurray!

My parents and grandma sent me cash, so I’ll be buying some new work clothes and probably a router so DH and I don’t have to share a computer anymore…it’s seriously not working. We’re both junkies. LOL

That’s enough to make me really want to swear off the sugar.

My breakfast was two part. Did I intend it to be? Nope.

I got to work, and a co-worker had brought in homemade-by-little-old-ladies glazed donuts. I, normally, am not a donut person, but these were small, light, fluffy, and so homemade they screamed.

I couldn’t handle it and had one before I’d even turned my computer on for the day.

Then, a bit later, I ate my planned breakfast…and ¾ of the way through, realized I didn’t photograph!

I had an egg + an egg white, and a slice of reduced fat Monterey jack cheese on a bagel thin. With a handful of red grapes.

I packed a lunch, but at the last minute ended up attending a luncheon meeting for a co-worker (with lunch provided). Luckily, the person I filled in for eats relatively healthy, so I was pleasantly surprised to find a nice, light chicken salad (with grapes and almonds) on whole wheat homemade bread and sunchips in my lunchbox. Score!! After lunch I headed back to my office and succumbed to the leftovers from my giant birthday cookie from yesterday. I had the thinnest slice I could sliver off, but still…when the sugar finally left my system, I was pretty “crashed”.

As snack time rolled around, I was admittedly not all that hungry. My tums hurt from all the sugar over the last 2 days, I had crashed from the cookie, and was all-around irritable. But, I need a good workout tonight, and tonight is back and bicep lifting night, so I forced myself to eat something to fuel me…and promptly forgot to photograph. See that? That’s the remains of a handful of pistachios and a Clementine. Aka my snack.

Tonight is 30 minutes of steady state cardio on the elliptical, plus weights for biceps and back, and some piriformis stretching.

Here’s what I did for back/biceps:

HRM says 460 calories burned. I must’ve been moving at a snails pace on the elliptical. Eh, you’ll have that.

Dessert, of course, is the yogurt and antibiotics chaser. Loverly.

I’m going to take it easy this evening, and I am off tomorrow to celebrate my birthday. Tomorrow’s plans involve…