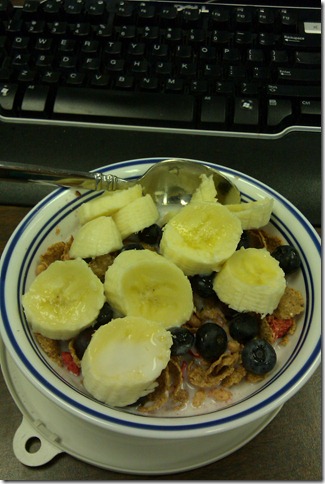 Busy Tuesday! Part of my job is funded by HUD (Department of Housing and Urban Development) and my APR (Annual Progress Report) is due soon, so I’ve been working on that….and still trying to reschedule meetings from “Snowmageddon”!

The Red Berry Crunch made an appearance today, in its usual way – milk, blueberries, and banana! After breakfast and working a bit, I took a quick break to go get my new license photo taken… I liked my old license pic…not sure about this one. You can tell I’m thinner through the face, though. And they changed the camera, so the color is better, but it’s way closer up to your face…none of my clothing shows!

My hair was way shorter back then, and I was still fighting the contacts battle at the time. I miss my contacts. I don’t miss my hair being that short, or those sideswept bangs! Ugh!

Lunch was a side salad (spring mix, tomatoes, cukes, peppers) with red wine vinegar and one of the fundraiser pizza’s I mentioned on Saturday.

For some reason, in my packing-haste last night, I thought it was a good idea to cut the pizza in half and lay it in this container. There may have also been two unpictured soft pretzel bites. A co-worker got an order of pretzel bites and nacho cheese for us to split as we ate lunch. Deliciousness.

Incidentally, I photograph my food at my desk as I’m unpacking it, but I eat in our conference room with my co-workers. Now ya know.

Kind bar. Love these things, and they power me through my workouts awesomely. Skillet Noodle Lasagna. I tried to smuggle Barilla Plus! Pasta into it and he picked up on it on the first bite. So much for that. DH had an evening work meeting, so dinner was a bit later than usual so I didn’t have to re-heat it for him.

Tonight I did 20 minutes of HIIT on the elliptical, then I stretched briefly, and did abs. I keep a folder of exercises I’ve kept from magazines, etc, and I pulled out a couple new ones to try. This was more of a test run of new exercises than an orchestrated abs workout.

Then I moved onto lower body…

This was actually only half what I thought I’d do, but my left quad was hurting, and I was draggin’.

Evening included my customary yogurt to chase my antibiotics with, as well as 1/2 a cupcake from market, in honor of the day-before-my-birthday. ha!

So most evenings are the same: PJs, husband, dog, Olympics, and my book. 🙂