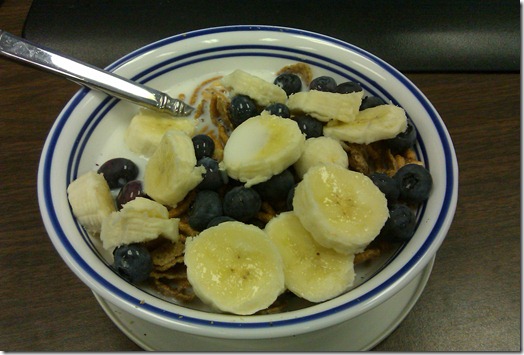 When I woke up this morning I felt rough. So I promised myself I’d call and make a doctor’s appointment once the office opened. Last time I felt like this I ignored it for a month, and when I finally did go to the doc, I had 2 ear infections and bronchitis!

I wasn’t going down that road again. I’m just addicted to this combo! Plus it stays with me really well.

After breakfast I called the doc. They could take me at 11am today, or not again until Thursday. (Nobody’s scheduling anything for tomorrow because we’re due to get more snow)

So after a brief doctor’s appointment, I was diagnosed with a sinus infection and 1 ear infection. I left with antibiotics and a nasal spray I have to use 2x a day for three weeks. That’s some serious nasal spray!!

Lunch was eaten exactly how it looks – out of baggies. I had a noon meeting I had to run to after my doctor’s appointment, and then I had another meeting after lunch. So I wolfed down my turkey sandwich and a handful of pretzels, then took the carrot sticks with me when I walked to my meeting. The rest of my lunch and my hummus didn’t get eaten 🙁 I tossed the rest of them and ate a Kind bar instead. Almond and coconut today! I love these things. HRM says 230 calories burned. Anything is good when you don’t feel good. LOL

On my way home, I stopped at the grocery store to get ketchup (weird. I know, but DH says we’re out, and he has venison burgers to eat), ice cream (I usually buy the Edy’s Slow Churned. I love it and don’t miss the extra fat) and brownie mix (Ghirardelli. Cuz if I’m going to use a box mix, it’s going to be a damn good one).

I’m craving brownies and ice cream, and dangit, I’m having it. LOL

I think baked goods are my snow food. Do you have a snow food? Something you crave when it’s crappy outside?

Dinner was courtesy of the crockpot. Love my crockpot.

We had beef stew with crusty bread (whole grain for me, and white for DH). My work is closed tomorrow (*GASP* First time I’ve seen that in the almost-5 years I’ve been here!!) so I’m going to focus on rest. We’re supposed to get another super-storm tonight of snow, so hopefully DH will be busy snow-blowing us and the neighbors out, and I can just hang out and read. LOL