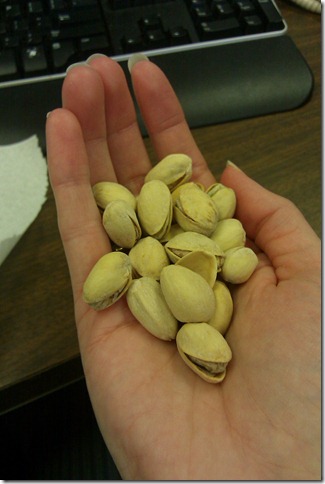 I am just frazzled and cranky today.

It started with a morning which involved me in my front yard with a Ziploc getting a “stool sample” from the pup. In my pajamas. As the school van came to pick up my neighbor’s daughter.

That’s really when I should’ve just gone back to bed.

Instead, I decided to push forward with my day, which also resulted in a day full of…

Just one of those days!

But the chicken did get flipped by DH, and I did survive the day. Although not without thoughts of a stiff drink. Or two. Or six.

Breakfast was undocumented…as a result of this morning’s insanity. But it was a bowl of Nature’s Path Red Berry Crunch (seriously addicted to this stuff) with 1% milk, fresh blueberries and the tiniest banana I think I’ve ever purchased.

It was also wolfed down at work before a 9am meeting.

After my am meeting, I was starved, but it was getting close to lunchtime so I just had a handful of pistachios…having to peel the shells keeps me from overeating, I think. LOL Leftovers lunchie – but it was delish! I had a side salad (spring mix, cherry tomatoes, red pepper, cucumber, and carrots) with light Vidalia onion dressing (addicted to this stuff. I wish I could find an organic variety) and Barilla Plus! Pasta with leftover vodka sauce from Friday. (Although hurting a little in the protein department. The Barilla Plus does have some added, though)

My customary 2 mini pieces of dark chocolate with almonds An organic apple with natural PB…but work was insane when I ate it, so here’s an arbitrary picture of an apple and peanut butter. My leg is finally starting to feel better, but I promised DH that I would take this whole week easy on it.

So tonight I started on the elliptical at a low resistance…but after about 20 minutes my leg was hurting so i hopped off and got on the treadmill.

Admittedly, I’m completely bored with the lack of intensity. But I know easy days/weeks can be good too.

HRM says I burned another 500 calories. I’ll take it.

Came home and made dinner..it had started snowing, so no walk for the pup today. (She went to work with DH this afternoon, briefly, and to the vet, so she’s had plenty of excitement. LOL)

Maybe it’s just been like 10 years since I had one. Haha

The recipe is posted over on my cooking blog, regardless. 🙂

I served it with mashed potatoes (poor DH…he loves them and I rarely serve them) and steamed broccoli with lemon. There’s tons leftover for lunches for DH or myself (I have an overflow of lunch this week though!) as well as my dinner on Thursday. DH is headed to Baltimore to go to Fogo de Chao with friends.

My only plan is to maybe use the foam roller on my leg…it’s feeling more sore than painful today. And then sit on the heating pad, again.